This entry will be short and sweet, just like my time in Zurich (it’s more for my own documenting purposes but I’ve posted it in case you’re interested 🙂)

After waking up late, falling onto the floor from the top bunk, putting on my shorts inside out and almost missing my flight (in my last blog post), I somehow managed to make it but I made a rookie error along the journey.

The flight itself was amazing (I would totally fly Edelweiss again), I misread my calendar which said I’d arrive to Zürich at 9pm but I didn’t realize that was Vietnam time. We were actually scheduled to arrive at 3pm.

The day before, I organised a couch surfing and found one so quickly (bless!) Three lovely people actually accepted me but I chose the first one (first come first serve right?)

The only issue was… He didn’t finish work until 6.30pm

But actually it wasn’t really a huge problem. It gave me time to procrastinate and find my way around the airport (sort of – Zurich airport is a maze).

I had to first go to the transfer desk to get my boarding pass for my connecting flight to Spain but customs wouldn’t let me go through because I had a big tube of toothpaste (woops – I literally just bought it in Vietnam because it would be cheaper than buying it in Spain or Brazil and forgot to put it in my check in luggage – sigh). (***update*** I’ve ended up losing that tube anyway so it’s been an ultimate waste of time ~ lol).

Because I had time, I spent about maybe 30-40 minutes putting as much of my new toothpaste into an old tube which I’d almost finished (probably not worth the time I invested but hey, I had time and I hate wasting things).

I folded the new tube and tried my luck putting it through the xray machine anyway but no luck – they confiscated it straight away (dammit – oh well, at least I managed to salvage half of the tube).

After walking what felt like a mile or two, I finally found the transfer desk, got my boarding pass and then I was free to do what I pleased!

I tried organising wifi on my phone by myself without much luck (I didn’t get some verification code) so I ended up walking probably another mile to find a help desk who could set it up for me…finally! I had internet…

I was checking all my emails and noticed a couch surfing message from another host who agreed to host me. He gave me his Whatsapp number so I thought I’d just let him know I already was accepted elsewhere.

I respectfully declined the new host’s offer but it was a shame because we got along really well. I felt rude if I canceled a couch surf from someone who already agreed to host me and was changing their plans for me (I always stick to anything I commit to).

I decided to walk around the airport a bit to have a look where I could sit down and eat some food ~ everything looked so amazing (of the best quality ~ I had no idea that Swiss food is so perfectly made).

However, the perfection came with a price and for me, culture shock. It’s probably more accurately described as price shock actually ~ even though I come from Australia where EVERYTHING is expensive, traveling throughout South East Asia for the past three months made me accustomed to paying less than AUD$5 for accommodation and ordinarily about AUD$2-$3 per meal so of course I was shocked when I saw the prices (even though I knew Switzerland was an expensive country ~ I guess you just don’t know it properly unless you see it with your own eyes). For example, coffee at the airport was 5 Swiss Francs, which is about AUD $8 (about 15-20% more than the price of a coffee in Australian airports).

While I was sitting and enjoying delicious Swiss food at the airport (Zurich airport food is an absolute must!), my original host finally replied to my message, giving me detailed instructions of how to get to his place from the airport by bus. It was simple enough… Except I had no Swiss Francs and could only use my credit card. For some reason it was impossible for me to find the bus ticket counter at the airport and the directions people were giving me were far from clear.

Luckily my host came to the airport to get me otherwise I probably would have been wandering around the airport aimlessly for probably another 2-3 hours.

We met at the bus station. I didn’t realise how cold it was in Zürich until I stepped outside – wow… It was 3 degrees celcius! 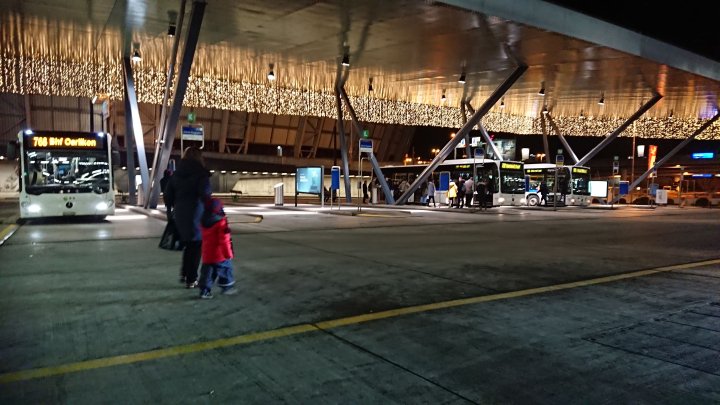 I was sitting there waiting for probably only two minutes before this guy came up to me.

We hugged and I was surprised that he found me so easily. We both hopped on the bus without a ticket (lol I wish I knew I could do this).

His place was only three stops away and about a 5 minute walk from the bus stop.

Once we walked in, I was greeted and farewelled by one of his house mates and took off my shoes. He then showed me around the place, gave me a towel, the wifi password and prepared my bed (futon).

The place was like a mansion – it was Huge! Not only did it have a massive backyard which looked the size of a football field, the place was three stories, had 12 bedrooms, two kitchens, I think 3 bathrooms and a sauna (what!?!?)

The living room (my room for the night) was huge, warm and cozy. There was a piano, lots of books and plants. The room even had a nice warm yellow glow to it. Everything was also really clean and the downstairs kitchen had a cool retro feel to it. My host told me that the house was built in the 60s. 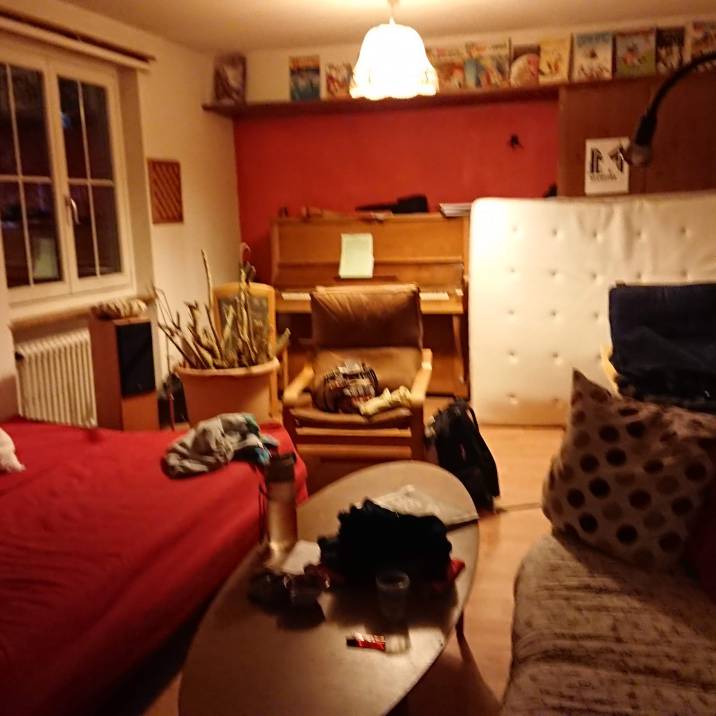 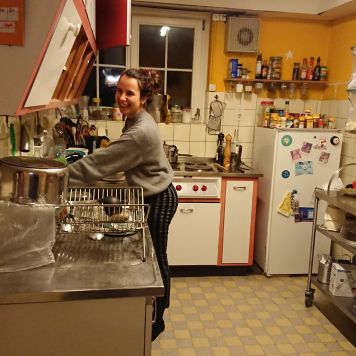 My hosts’ place (sorry for the bad quality picture)

We sat for a bit, chatting about traveling, his job as a gardener and couch surfing. He lived in South America for a year and chose to host people basically to give back to the traveling community.

Host: “you came on a really good day. This is the first sunny day in about three weeks”

Finally I had luck with the weather, especially after dealing with typhoons and thunderstorms constantly in South East Asia.

He then he went to the store to buy some food to cook for dinner.

When he came back, he offered me some Swiss chocolate, Swiss cheese (oh.my.god!) and started cooking.

We ate together and went to bed at around the same time (after I had a shower of course). I was so tired by this point (it was around 10pm) because in Vietnam, it was actually 4am so I passed out pretty much straight away even though my host’s house mates were downstairs talking.

When I woke up it was still dark – I had absolutely no idea what time it was. My phone was telling me that it was 3am…. Was I finally suffering from jet lag for the first time??

I had absolutely no idea but for some reason I wasn’t bothered (probably because I prefer having more time to catch a flight).

I put my bags out in the cold (my last attempt to get rid of bed bugs), got ready and ate some bread and butter I saved from the flight (it still tasted delicious).

I was determined to walk… Even though it was – 5 degrees Celsius outside. I thought: “it should be fine because I’m walking”

I pre-loaded the directions to the airport on Maps, put on two pairs of socks (because all I had were my crocs sandals with me) and all of the winter gear I packed in my backpack (I really didn’t plan my luggage properly but luckily I coincidentally packed most of my winter stuff in my carry on bags for my Last bus ride in Vietnam).

Then… My journey towards the airport began…

I mean, it was only a 30 minute walk but it felt like forever because it was dark, uneventful and cold. There was even snow on all the cars I walked past.

I started even toying with the idea of hitchhiking because the route I was taking looked like I had to go on a highway with no pathway… But I persisted and kept walking and walking and the pathway never seemed to stop.

About halfway towards the airport, my feet and hands were starting to feel really really cold.

Seeing other people walking also gave me hope and motivation.

I started doubting whether I was heading in the right direction so I ended up flagging a local down.

Me: “can you speak English”

He shook his head (no)

Luckily I saw signs with the word airport in German and remembered the word.

He points the direction I’m headed and speaks some German words.

I got the gist of what he was saying (i think)

Luckily I still remembered a little bit of German from when I visited and was learning through Duo Lingo.

I kept walking and then saw some pretty lights and a big sign saying Zürich Airport.

I made it. It was the same bus stop as where I met my couch surfing host.

Feeling accomplished, I walked into the airport confidently. The gate wasn’t open for my flight yet so I treated myself to a pretzel (I really couldn’t resist after smelling it).

Oh. My. God. It must have been the best Pretzel I’d ever had in my life 😍 The flour was so soft, the pretzel was still warm and the salt they used was absolute perfection. I wanted another one.

I also bought a banana to fill time and be healthy.

Once my gate was open, I sculled down my water and made my way to Gate A28. I swear it felt like I was walking forever (Zürich airport is huge).

I saw the big sign saying Barcelona, 8 degrees Celsius (oh no… It was almost as cold as Switzerland).

With only an hour to spare, I relaxed and caught up on social media…

I loved the way we boarded.. It was so efficient – you had to scan your own boarding pass and could go straight through.

Sadly the plane wasn’t as nice as the one from Vietnam to Switzerland but it was only an hour and a half flight and I couldn’t believe my eyes – I got to see the Swiss Alps during sunrise. It was truly a spectacular sight.

I may have snuck out of my seat while the seat belt sign was still on to get a good look and a lovely Swiss man let me swap seats with him because he used to be a pilot and had seen the Alps perhaps thousands of times (what a lucky guy). He told me that he never got sick of the view when he was a pilot and told me the name of one of the Alps.

Yayyy…. I was finally going to Barcelona – my long awaited dream (Spain has been on my bucket list since I was a teenager ❤️)