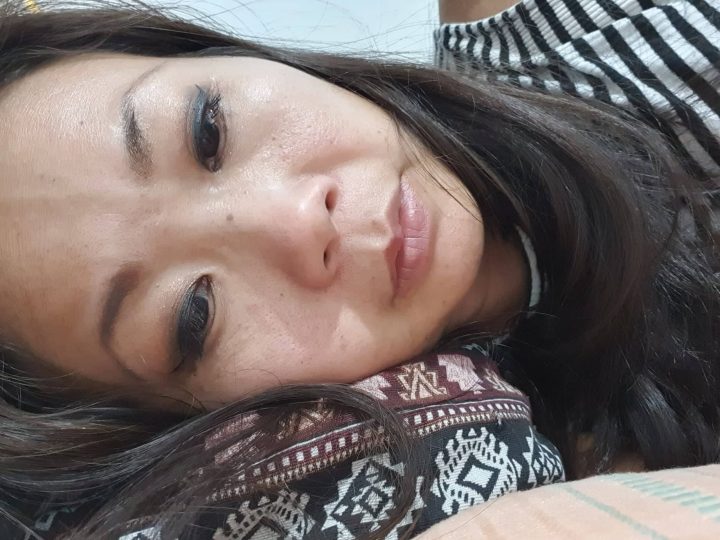 Yes it’s a depressing photo and it was taken at a time when I was sad…but I think it fits the topic well.

So I’ve tried Couchsurfing quite a few times now (Thailand x 2, Switzerland, Salvador, Medellin, Guatape and now Lima) and I think I’ve done it enough to form some sort of opinion. Obviously my opinion is probably not as well-rounded and fair as other surfers who have been to so many more places than me but I definitely have my two-cents about solo female travel and Couchsurfing.

I’ve been inspired to write this piece because of a host’s reaction to my review (I feel compelled to share my thoughts, maybe it’s just my need to vent???) This reaction led me to start thinking about the fairness of my review and what drove me to write this. Naturally, I started assessing whether my host’s reaction was warranted. I even ended up searching about my situation online which led me to a whole bunch of other topics regarding Couchsurfing (talk about opening a can of worms!).

Some of the stuff which came up were “how to get my first Couchsurf”, “what to do when your guest doesn’t rock up?” and the more important one “crimes which have happened through Couchsurfing (and other platforms such as Airbnb)”.

Naturally, this got me thinking about Couchsurfing in general and about the conversations I’ve had with some girlfriends about it…because let’s face it ~ as a solo female traveller, we are unfortunately at higher risk than male surfers. We are putting ourselves in a vulnerable position where the guy could potentially be using Couchsurfing to lure in a girl to try and get romantically involved with her or sexually abuse her in some way. I definitely faced this fear especially before my first Couchsurfing experience in Koh Tao in Thailand (it ended up being completely fine but if you’ve kept up to date with my blog and read my story about it, there was a stage during my stay where I was shit scared that my host conned me and stole all my things).

Sadly, Couchsurfing coming with the risk of crime and sexual abuse are some truths which I feel is a necessary discussion – because after doing my two seconds of research, it seemed like bad or somewhat negative Couchsurfing experiences aren’t openly discussed enough in the public arena. Obviously we can’t forget the majority of good which comes from the platform but the dangers and uncomfortable situations which seem to be a normal part of Couchsurfing are definitely something everyone should be aware of…especially new users. After all, knowledge is power (and you all know how much I love info-sharing)!

Ok, so I’ve said my disclaimer…and I’ve given you a bit of my background…now it’s time to dig a little bit deeper…

What happened to inspire me to rant about Couchsurfing?

Well, I stayed at a guy’s house for 2 nights and recently left a review which was predominantly positive but had about two or three negative points. I’m going to copy and paste my review word for word:

The amount of hospitality X and his family showed me was wonderful. My flight was delayed and he stayed up and waited for me. From even before I stayed, he gave me all these recommendations and knew exactly what information to give me to make my trip more efficient and enjoyable. It was a shame that we couldn’t hang more but he is a great host. I really enjoyed having breakfast with his family and meeting his dog. The only negative is that I was highly allergic to his dog and the place was a little dusty but it’s a huge place with 17 rooms. It can also get a little noisy with all the traffic from the city but I managed to somehow fall back asleep. Sadly, it was hard for me to sleep (cos I’m a sensitive sleeper). Thanks for all the recommendations and for making me so welcome like I was part of the family! Hopefully we can meet and have a proper catch up in the future!

Admittedly, I’m a little blunt…but I don’t believe in sugar coating things, especially when it comes to leaving reviews for the benefit of a wider community. I like painting a realistic picture. Some of the things at his place detracted from my stay and I wanted to share this info with the Couchsurfing community to give an accurate picture of what it was like to stay at his place. But as soon as I wrote my review, I received a message from him.

“You wrote that my place was dusty???”

Then I apologised and asked him not to take it to heart because I wasn’t intending on offending him. I was just expressing the truth – his place was dusty so much that I fell down the stairs (there was also a lot of dust underneath my bed and dog hair everywhere on the top floor but I left that out of my message).

“I have been offended. Lucky in your trip.” (i.e. good luck for your trip)

On the one hand I couldn’t help but feel a little bit frustrated since I was just being honest…but on the other, I knew how it felt like to be offended by something. Everyone has different levels of sensitivity (I know I’m very sensitive and have been offended by little things in the past). And he had a lot of pride in being a host. Without question, he did to me and has done a wonderful thing by opening his doors to the world and doing nothing but being generous. I get it…it would feel like a kick in the nuts if you’re doing all this to go above and beyond for people you don’t even know and they don’t seem like they appreciate what you’ve done…(I think that’s how he felt).

If I’m correct, I understand how he felt…but sadly, it doesn’t change the fact that I felt uncomfortable. I wish it did. And I know that ‘beggars can’t be choosers’ especially with free accommodation but this still doesn’t change how I felt and how I feel about painting an accurate picture for the world.

Then…I started thinking ~ it really sucks that I feel like I can’t be honest in my review just because I might offend.

Then…I couldn’t help but questioning my motives for including negatives in my review in the first place. I kept coming back to my objective of painting an accurate picture.

But why do I even need to do it?

Simple ~ because it’s so important for me.

Recently, I’ve booked a few AirBnB rooms and used Couchsurfing more and noticed the first thing I look for is negative reviews and how a host responds to such reviews. Yes, positive reviews are great (the more the better and the more detail the better too!) but negative reviews seem to be more telling. I’ve been in a situation previously where I didn’t write anything because I didn’t want to offend the host (I felt obliged to stay silent because they were so generous with me)…and then it occurred to me ~ if I’ve felt this way…then surely a whole bunch of other people have too.

The worst part is, people don’t know about my bad experience and then might go through the same thing that I did.

Nobody likes an unpleasant surprise.

I couldn’t help but feel like many people probably have bad experiences or not-so-good experiences but are either reluctant to share them or don’t share them at all for fear of offending someone, especially in the Couchsurfing community.

This made me think ~ we shouldn’t be holding back our experiences just because someone might be offended. I really don’t see the problem if it’s beneficial and for the greater good (as long as it’s not emotion-based and a personal attack)!

What about sexual abuse and Couchsurfing?

I need to talk about this because of my personal experiences and the things I’ve recently discovered or heard.

Plain and simple: many men will use Couchsurfing as a platform to try to have sex with a woman.

I’m not going to sugar coat this. It’s annoying as a woman to have to deal with a man’s hidden sexual agenda. I think it’s outright pretty fucked up that so many men do this. It’s almost like an abuse of power and misleading and deceptive conduct.

I guess that’s why it pisses me off so much. I can’t stand people who act in a misleading or deceptive way and I think it’s extremely unfair for everyone who genuinely uses Couchsurfing to connect with other travellers.

Before I came to Lima, I posted a public trip on the community and sent a message to 5 hosts to ask if I could stay with them. I didn’t expect it but I ended up getting about 30 messages from people (mainly guys) which offered for me to stay with them, to help me with my travels or to show me their city.

I couldn’t believe it – I seriously felt like I was going through job applications when I was deciding where to stay. It was so much work responding to everyone and reading through everyone’s profiles.

Before I left Colombia, a good friend of mine said “be very careful…Lima is the only place that I’ve heard of really bad things happening.” When I pushed to find out what happened, she told me that a friend’s friend got drugged and raped in Lima.

Then she showed me how she sifted through hosts in Couchsurfing.

I carried her words with a lot of weight. I’m not going to lie, I started getting a little scared about Couchsurfing in Lima.

A few guys persistently messaged me quite a lot of times ~ this didn’t make me feel comfortable either. I couldn’t help but feel like they were desperate to meet me (and to probably try to have sex with me).

Then…when I went on the internet today, I read incidences of men using AirBnb or Couchsurfing to drug and rape women. I also read a review for a host where a girl said that he was drunk and put his hands all over her friend’s legs.

Then…I remembered what my friends told me about their experiences.

Jubilee: “I don’t use Couchsurfing anymore because of all the awkward situations.”

Melka: “I ended up hooking up with his housemate and he got really aggressive towards me. It was so bad.”

Then…I also remembered situations where I used the Hangout feature in Couchsurfing where different guys in different situations ended up trying to make a move on me. I remember how it made me feel every single time. It pissed me off because I genuinely just wanted to make a friendship but it seemed to always be some guy who wanted to have sex.

I couldn’t help but to feel enraged.

That’s when I realised that “bad” reviews are extremely valuable, especially in communities where people can be vulnerable.

My last host was definitely respectful towards me but I still don’t think it’s right to hold back sharing unfavourable information just because we are scared of offending someone. Not everything is perfect. I guess some people need to get over themselves and their pride as well.

p.s. sorry to all the decent hosts and men out there. Couchsurfing has mostly been a wonderful thing for me and I’ve had some of the best experiences through the platform! Without it, I don’t think my trip would have been as awesome as it has been 😊